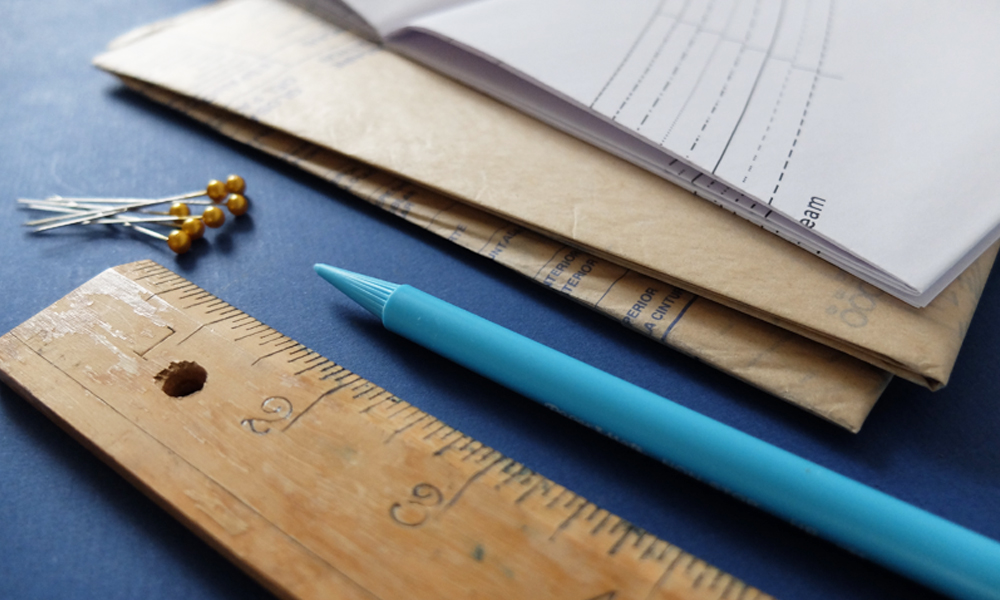 The Sewing Pattern Tutorials is a year-long FREE sewing course where we will demystify dressmaking patterns. We’ll begin with the basics so that if you are new to sewing you can join in from the start. We also know that lots of you want to learn new sewing skills so as we progress we’ll begin to cover more complex topics so that you will finish with the skills needed to deal with fitting problems too. In each post we will also have a sewing jargon busting section explaining any terms used that might be confusing. We’ve already covered the pattern envelope, now we are moving onto interpreting and altering sewing patterns. This week we talk through our top 10 sewing tools for drafting, tracing and fitting sewing patterns. Catch up on previous posts in the series here.

Once you’ve got to grips with using sewing patterns and made a few things, you’ll probably want to start making adjustments to your makes for a better fit. Here we share our top ten tools for making alterations sewing patterns. 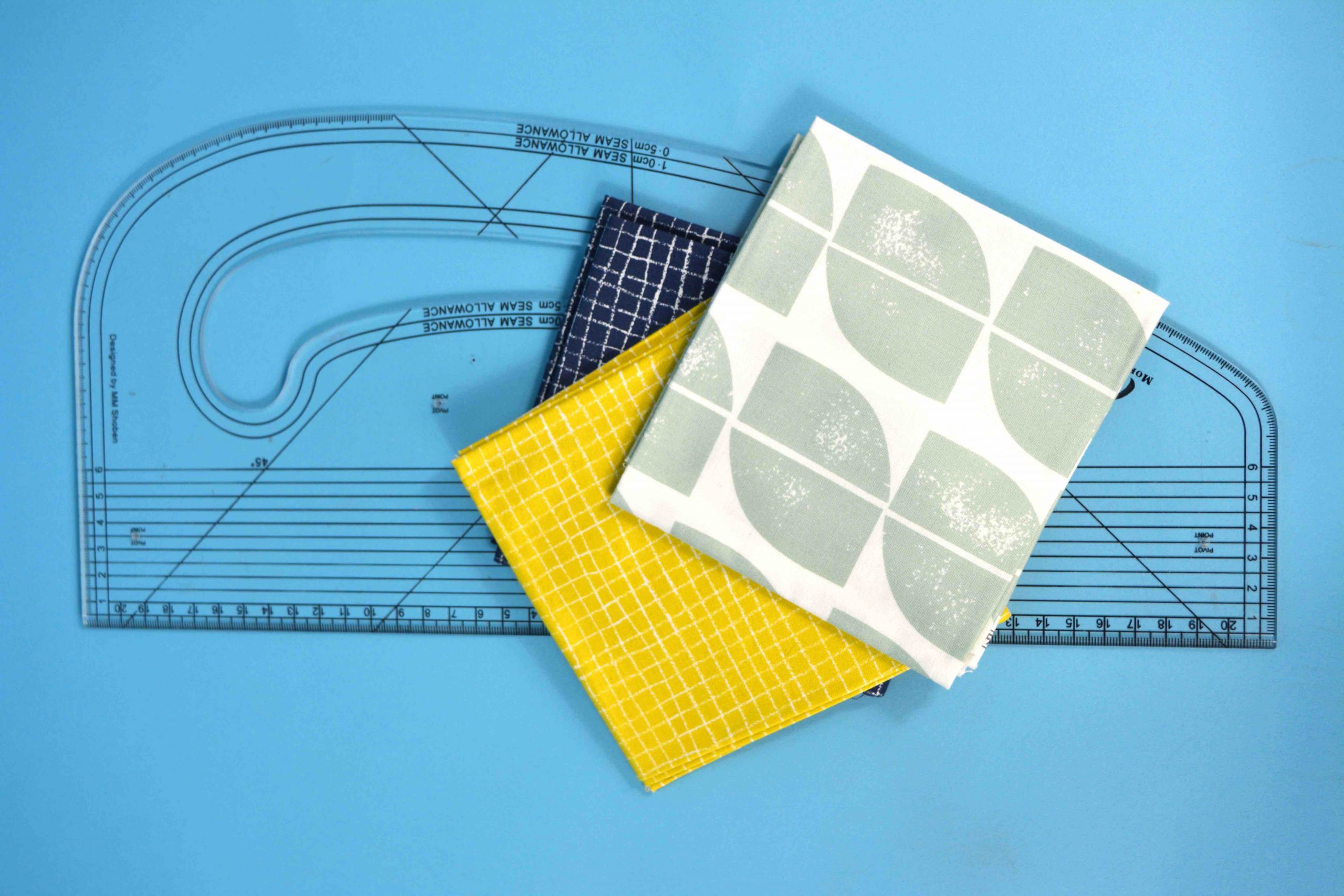 It’s the big one in the pattern cutting world. Pattern Master’s aren’t needed when you are first starting out in sewing but if you are regularly making changes to patterns e.g. full bust adjustments etc. then it will save you lots of time. The Pattern Master’s main function is to provide a number of different curves so that you can create a range of lines and shapes to alter patterns to your requirements. It is particularly good for drawing in new curves at the armhole. It’s also got a ruler around the curved edge so you can measure curved lines. Plus with lines at 45 and 90 degrees you can accurately slash across pattern pieces and add/check grainlines. In addition the Pattern Master has 0.5cm and 1cm seam allowance lines, which really help to redraw seam allowances. Pattern Master’s range in price and quality – if you think it will be useful for your sewing to get one, invest in the more expensive version. They are less flimsy and also actually accurate. I’ve tested a few out and some have measurements marked on that aren’t accurate. Even just a couple of millimetres out can make all the difference. You can find them at Morplan in the UK for £19.95 in both metric and Imperial. 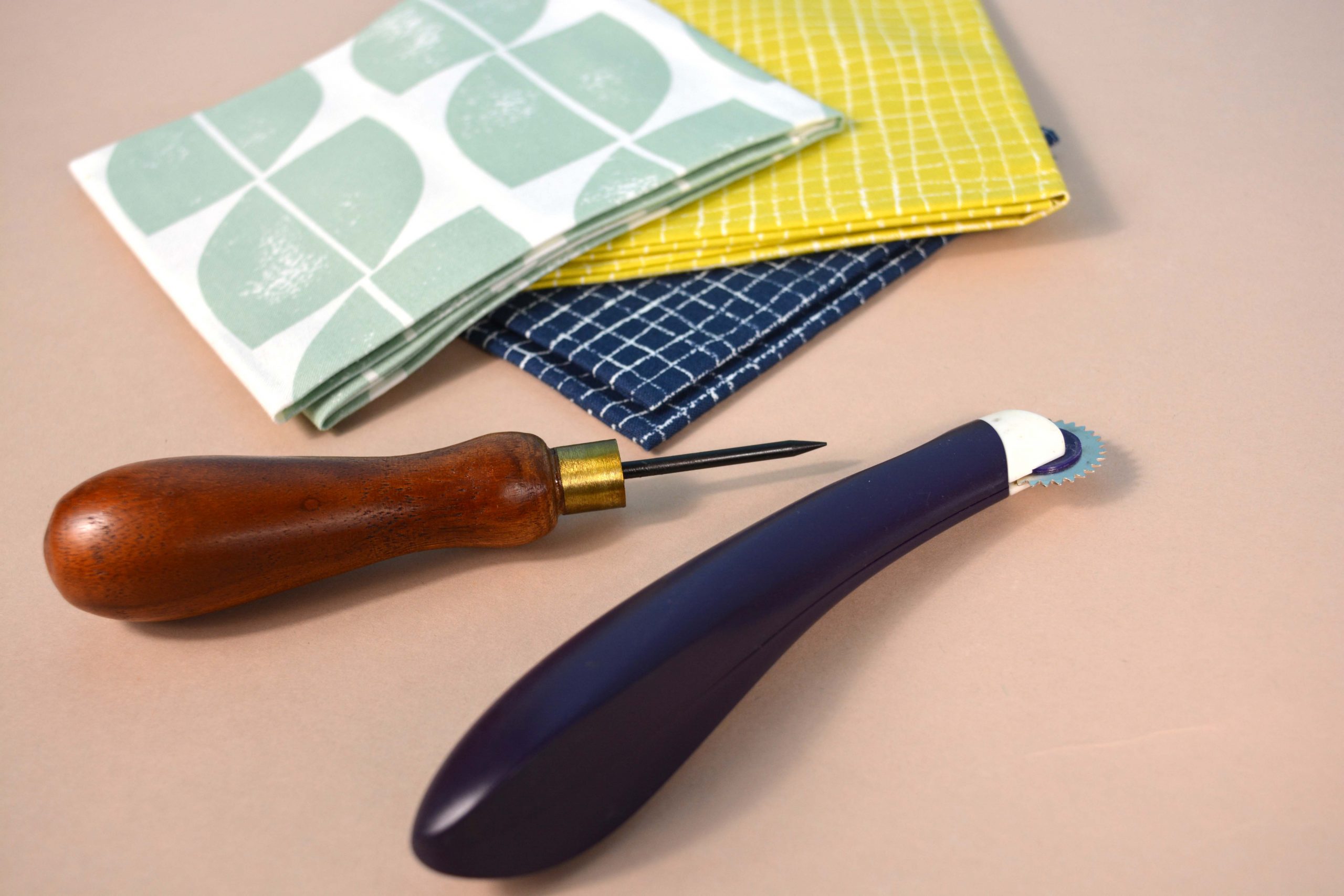 I have both a single and double tracing wheel – the single is useful for tracing patterns and the double for adding seam allowance onto a pattern. If you think you’ll need to make changes to your pattern pieces then tracing them onto paper can be a good idea. A tracing wheel is ideal for doing this as you can accurately trace over the pattern lines for your size onto the paper beneath. The double tracing wheel is the most recent addition to my pattern cutting tool box and I don’t know how I lived without it! If you have a sewing pattern without seam allowances then you can trace it while adding them at the same time. It’s also useful to add seam allowances once you’ve made alterations to patterns such as grading between sizes. 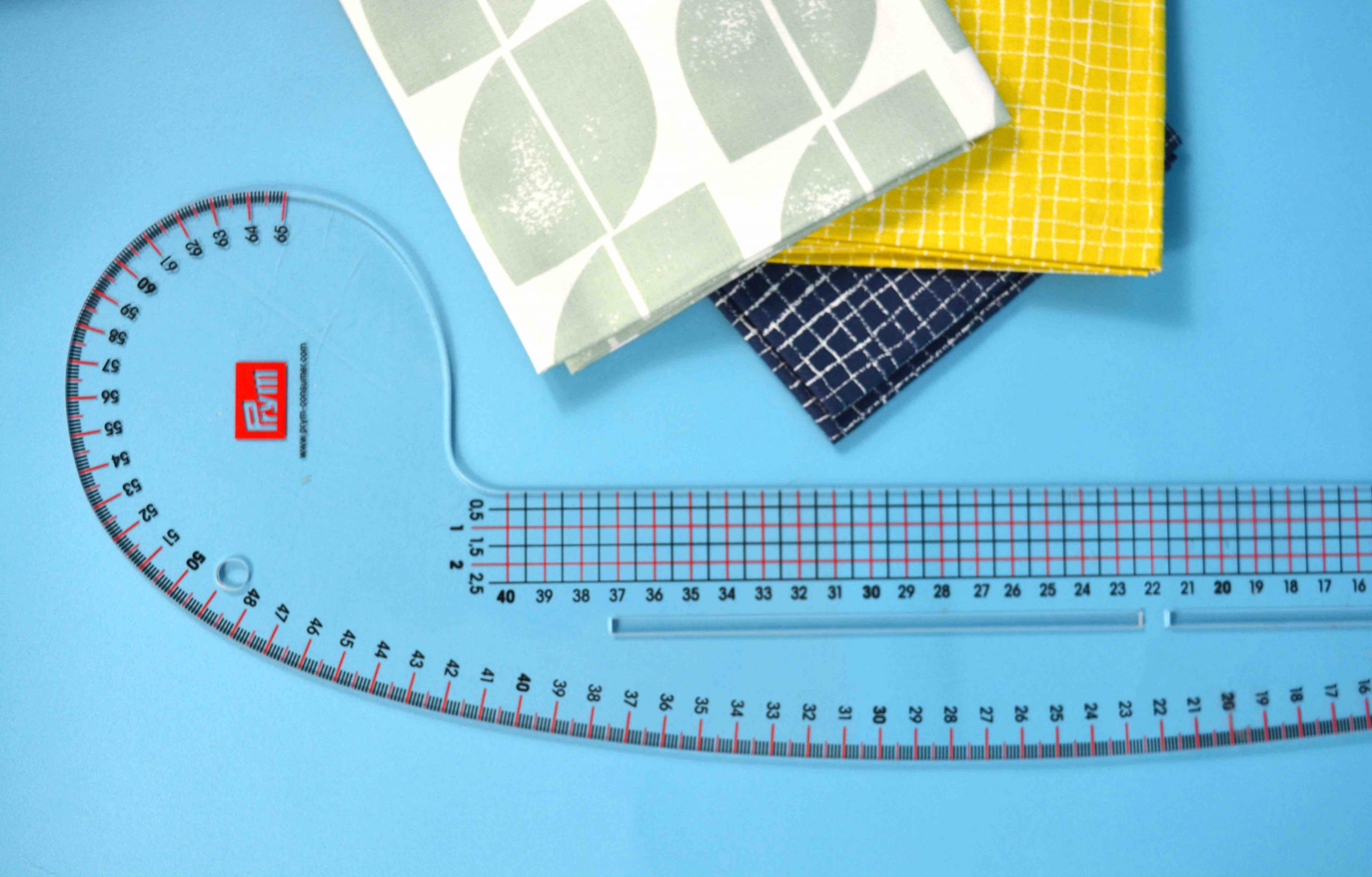 The French curve is also a popular tool for drawing curves in pattern cutting and making adjustments. It is most useful for drawing long curves, for example when you are grading between sizes. You can also use it for re-shaping, such as drawing a new neckline or armhole. 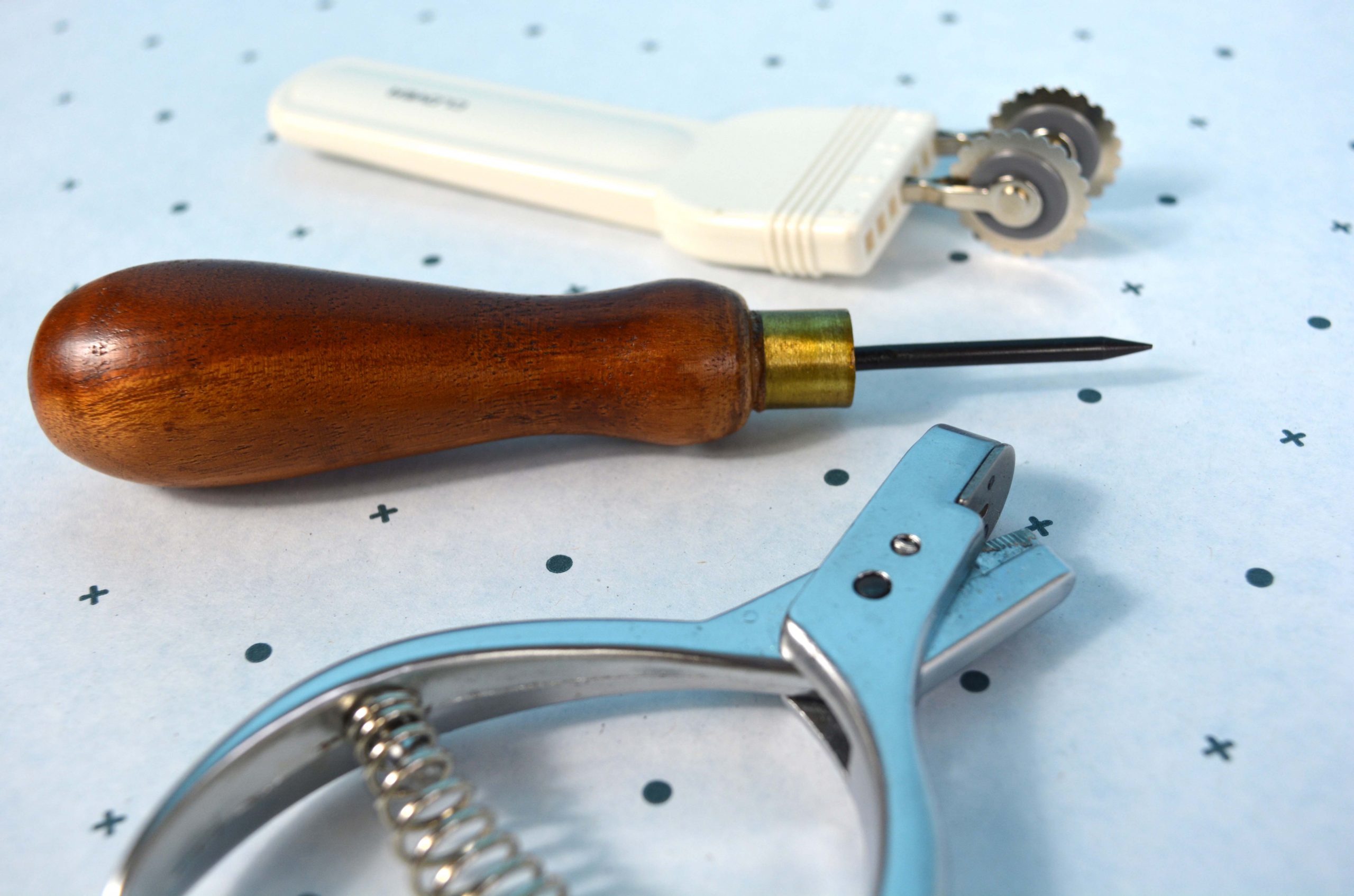 As the name would suggest, dot and cross paper has little dots and crosses on it, spaced out usually by 2.5cm or 5cm intervals. You can use these to draw lines at 45 degree and 90 degree angles quickly. The paper is also lightweight so you can use it for tracing. It comes on a long roll for easy storing. I get mine from William Gee where they also have a 10m starter roll.

When making alternations to patterns, you might need to attach extra pieces of paper or stick down pieces after you’ve altered them, for example after a small bust adjustment. Clear tape such as Scotch Tape, is easier to use than Sellotape because you can un-peel it and reattached it plus write on it.

A sharp H pencil is essential for accurate pattern cutting and alterations. Once you’ve got all your new lines drawn onto your pattern, go over them with a very fine tipped permanent marker. You can also use this to annotate your pattern with notes.

It’s really useful to keep track of changes you make to patterns by highlighting them with coloured marker pens. I use blue and red felt tipped pens for marking original lines and new ones so I know what changes i’ve made to a pattern over time. 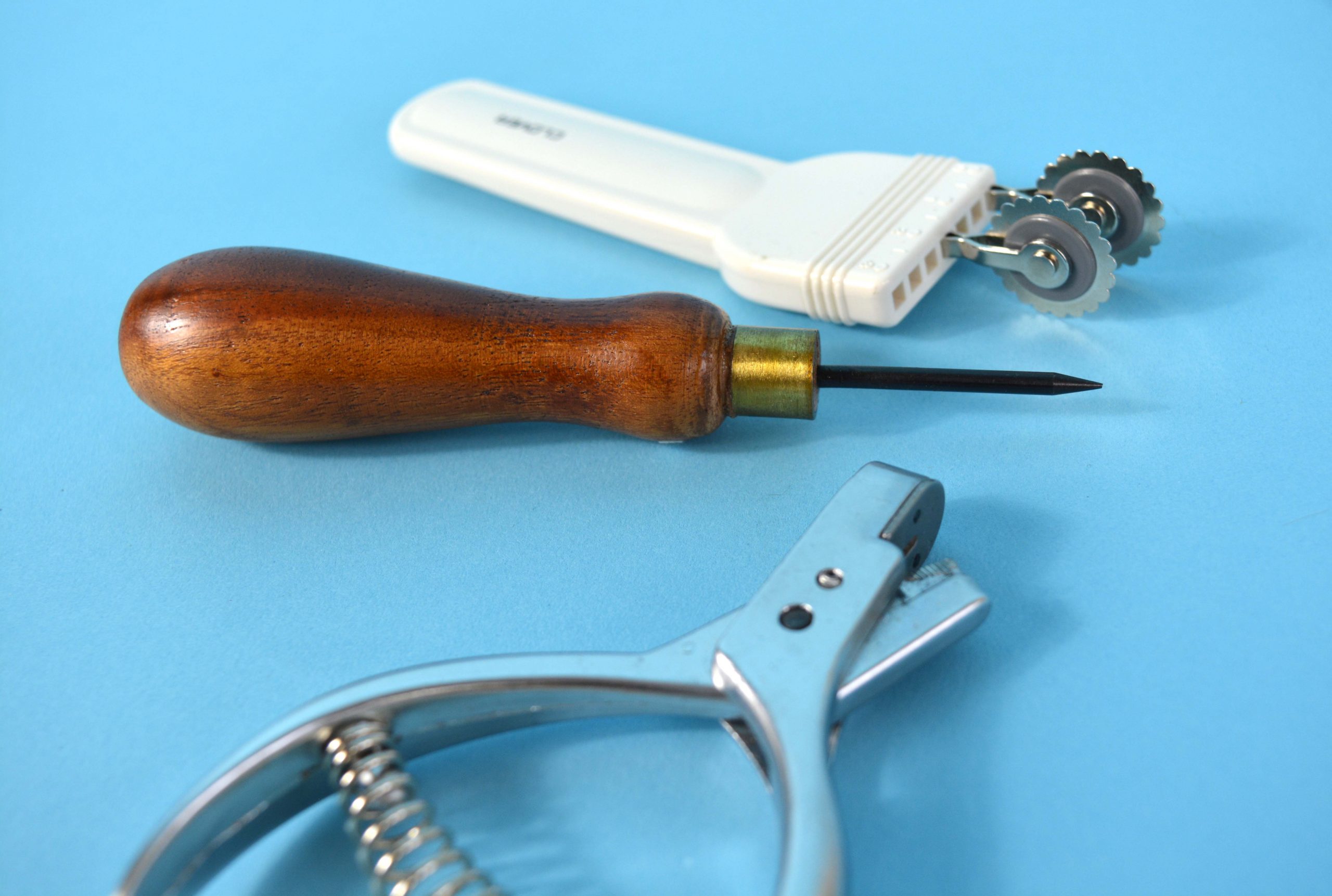 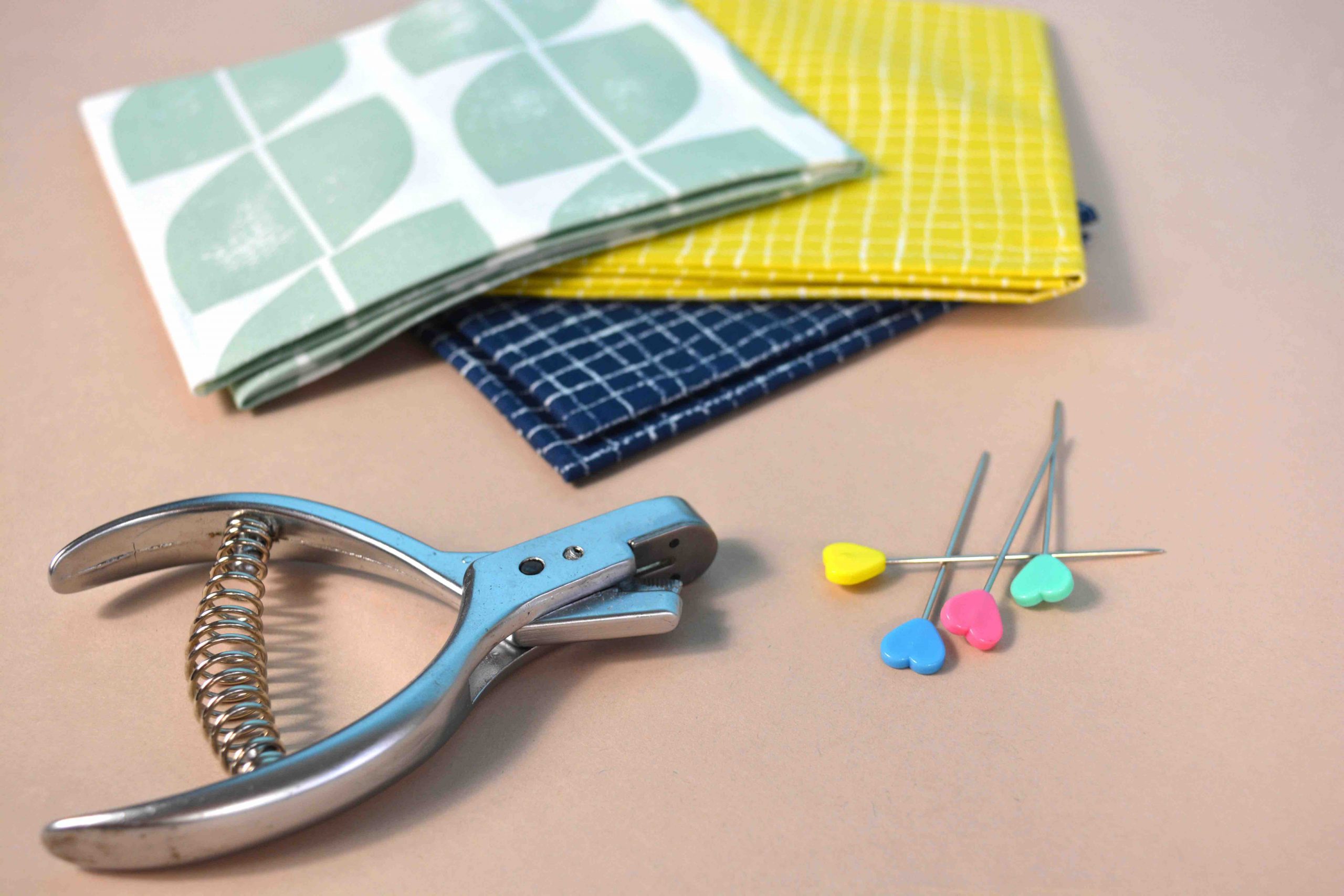 Manilla card or Pattern Kraft paper is thicker than tracing paper but still flexible. Once you’ve made pattern changes onto paper, to store your patterns in the long term it’s a good idea to trace then onto more durable Manilla card. It doesn’t crease or tip easily so you can store it long term and use it again and again to make new versions of the same pattern.

A pattern notcher isn’t an essential item for making changes to patterns but if you do alterations regularly and trace your patterns then you might find one useful. It’s a metal tool that punches a little indent into the edge of Manilla card or paper to identify the position of a notch. This makes it easier when cutting out fabric as you already have an indent in which to snip with your scissors.

The Sewing Pattern Tutorials 15: How to cut out sewing patterns and fabric