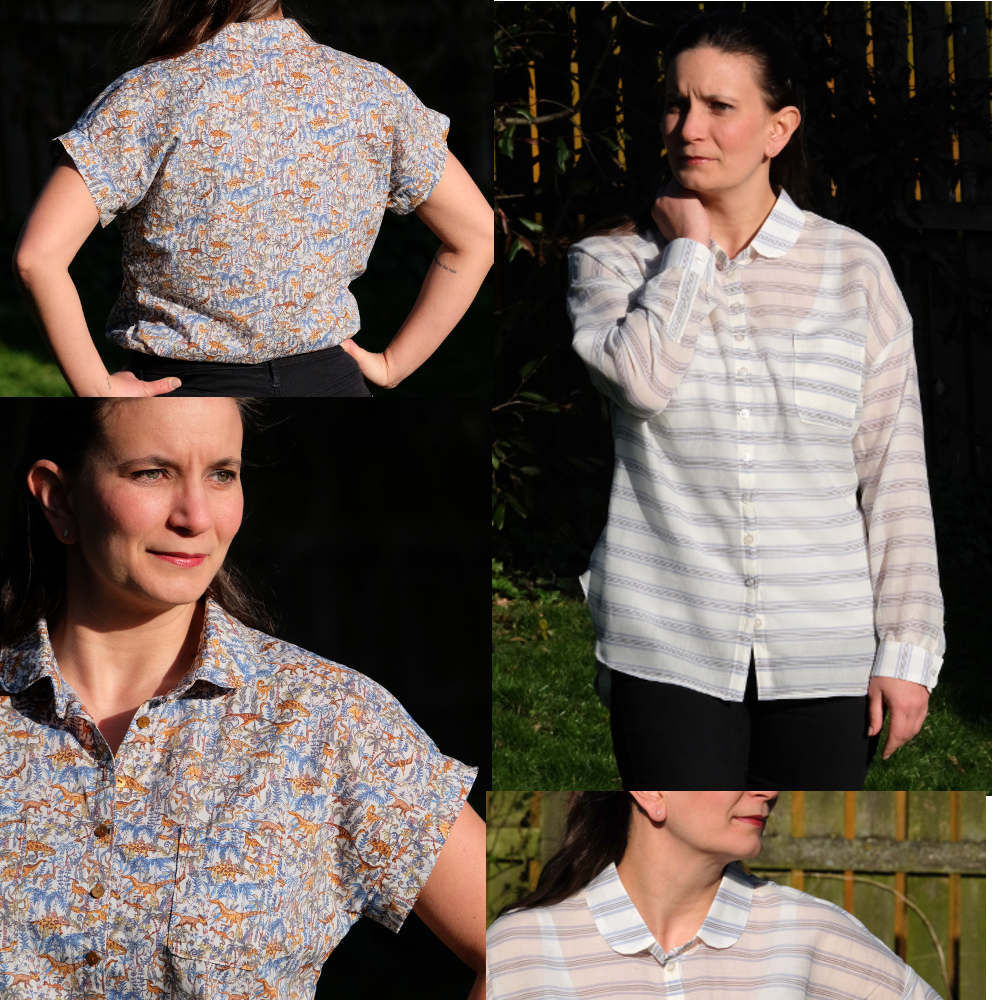 A review of Mélilot Shirt

I bought some lush Liberty print fabric and was thinking of making this shirt with it, but I wanted to test it first on some cheaper fabric (free, actually!) to make sure the fit was right, since it was my first time sewing with a Deer and Doe pattern. I am really happy with how it turned out, and will definitely wear this “test”! I have quite a large bust (30F) but a small waistline (29.5), and I used size 42. It fits well around the chest — not too snug, but not too loose either — and is a teensy bit loose around the waist/hips but not so much that the tailoring is lost! Overall the instructions were pretty clear, although a first-time sewer might puzzle over a couple of steps. The construction is lovely, using French seams so all raw edges are locked away. The pockets hide the tips of the darts, but still lay flat, which is a really nice detail. There’s an option to not make a placard to cover the buttons, which I wish I had done, since the white buttons against the green are really pretty.

Update: I have since made this pattern twice more, both times without the hidden button placard. I did another short sleeve version and a long sleeve version. Both times I cut a size 40 instead of 42 and was pleased with the fit — there was a bit less ease but nothing was tight!  My test make was of quite heavy fabric (not pictured) but both versions since then were of much lighter fabric, and I only interfaced one side of the collar and cuffs (on the long sleeve version) to keep them a bit softer.  I did keep the interfacing on both pieces of the collar stand though. The short sleeve version I’ve worn a bunch and it’s really held up through multiple washings so I’m glad I did this! The long sleeve version I really like, although I was dreading attaching the sleeves so much I missed the step where you sew the sleeve placket on before you do this — I managed to do it after attaching the sleeves, but with a lot more difficulty!  I sewed the placket into a square edge to match the stripes rather than the triangle in the instructions. The only fit modification I made was to shorten the sleeves by 1/2 an inch (probably could have doubled this, but I like my sleeves long so it’s ok). Just like the first time, wonderful finishing throughout, even for the sleeve plackets!  I do have to say that the sheer fabric tended to show the seams underneath — not a big deal for the french seams, but it was a bit obvious for the cuffs/collar especially since I only interfaced one side of them (the outward facing side to hide the seams underneath). Very happy with the final results.