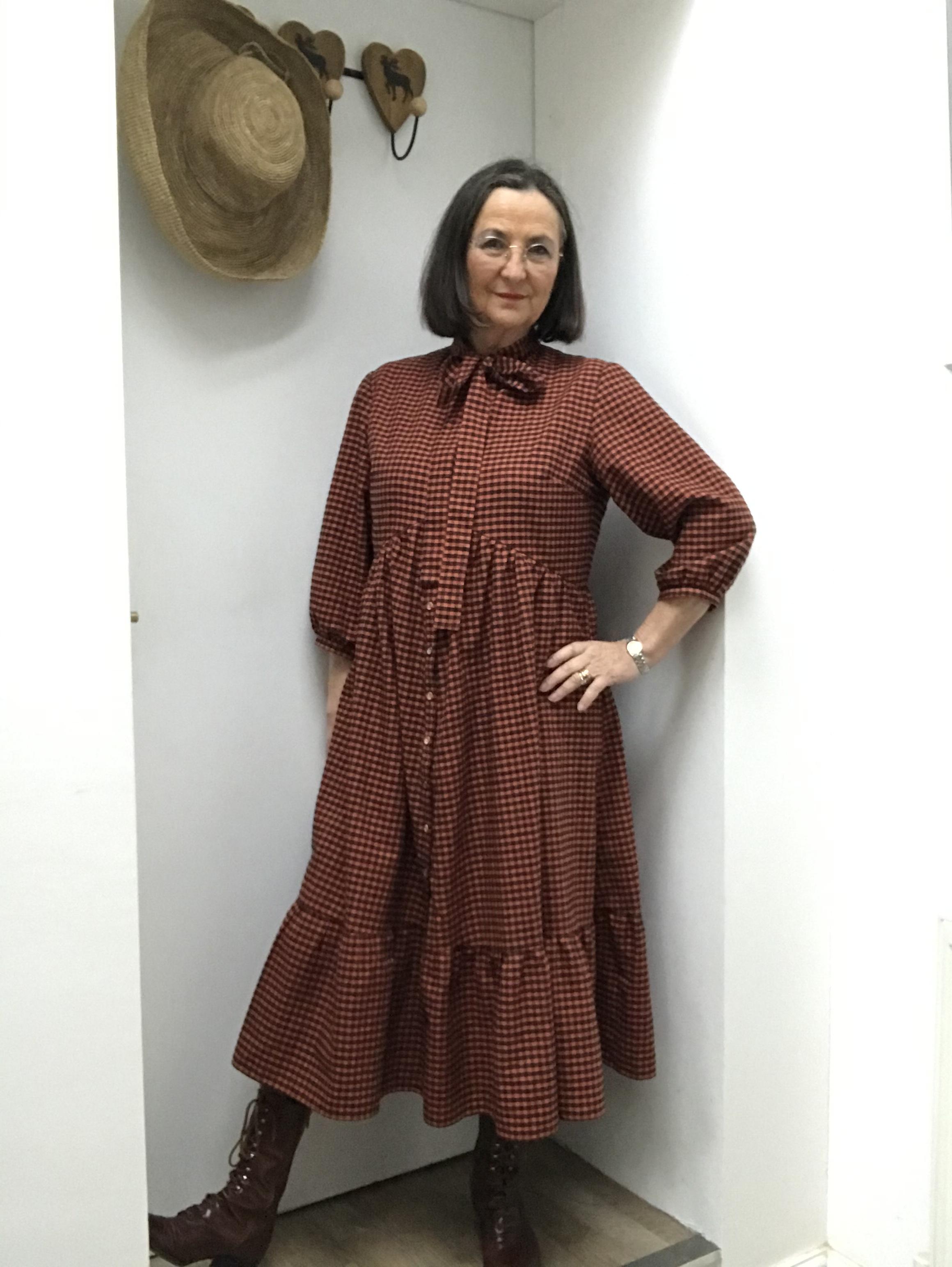 A review of Pleiades 2 Dress

Reviewed by Jannisews on 19th December, 2019

I was attracted to this pretty, feminine dress because I wanted a midi length but practical dress for Christmas Day. My fears were that the French patterns I have sewn so far did not accommodate substantial boobage, and indeed this one had no bodice darts.  Alarm bells.  My large waist was not going to be a problem as it is high waisted and the gathers and raised waistline would accommodate.  The pattern wasn’t clear whether the measurements give were finished garment or body measurement.  On checking the pattern width it proved to be the former, which only allowed me 2.5cms bust ease plus a little extra  as I wanted to make the view with the button placket.  I made the longer version (to the knee) and added a frill to that, so I needed extra material.  Luckily I had plenty and it was an inexpensive but very nice quality brushed cotton shirting.  I chose the button placket front opening and the pussy bow tie neck.

The minimal bodice ease and the lack of bust dart meant the bodice didn’t fit at all well.  I removed 1cm from each shoulder, going down the front to the arm scye notch, but very little at the back.
The back neckline was also cut very low for me so the pussy bow stood off at the back in a most unattractive way.

There were too many issues to make it a wearable garment so I completely dismantled the bodice, cut a new pattern with an FBA and a bust dart, raised the back neck and altered the shoulder length.  Fortunately I had bought a bolt end so had enough fabric to remake the bodice, but I did salvage the sleeves to reuse.

The pattern is drafted for a body shape different to mine, but the simple adjustments have given me a good fit, and show the benefits of making a toile, particularly when working with a designer who is new to you.

As far as the instructions go they were clear but minimal.  Without prior dressmaking experiences I would have found this pattern more difficult.   The instructions for attaching the pussy bow left me with a tie that extended past the centre front of the button placket right to the edge so you could not fasten the buttons to the top and tie the bow nicely.  I didn’t like this idea, and queried it with the designer.  She came back to me very quickly and said it was based on a RTW blouse she had.
I wanted to be able to fasten  all the buttons so I finished off the top of the button stand, and only took the tie band to the point on the neck where it  joined the button stand.  If you want more info about how I did this you can message me, or contact me through Instagram and I will explain more.

Finally I have a dress that fits well and I am happy with.  It is a little out of my comfort zone from a style perspective, but it’s no bad idea to push the envelope sometimes.  I would hate to be boring!