Have you ever considered a Career in Sewing? Do you dream of ditching the 9-5 and pursuing your creative dreams? This year we will be posting interviews for a range of different sewing jobs to give you a taste of what possibilities are out there. Today we interview Rosie Martin from DIY Couturewho’s brand new book ‘No Patterns Needed’was released last week. It’s her second book and we are kicking off her blog tour this week. There will be lots of lovely makes popping up this week and if you are on Instagram check out #nopatternsneeded to see makes from the book. 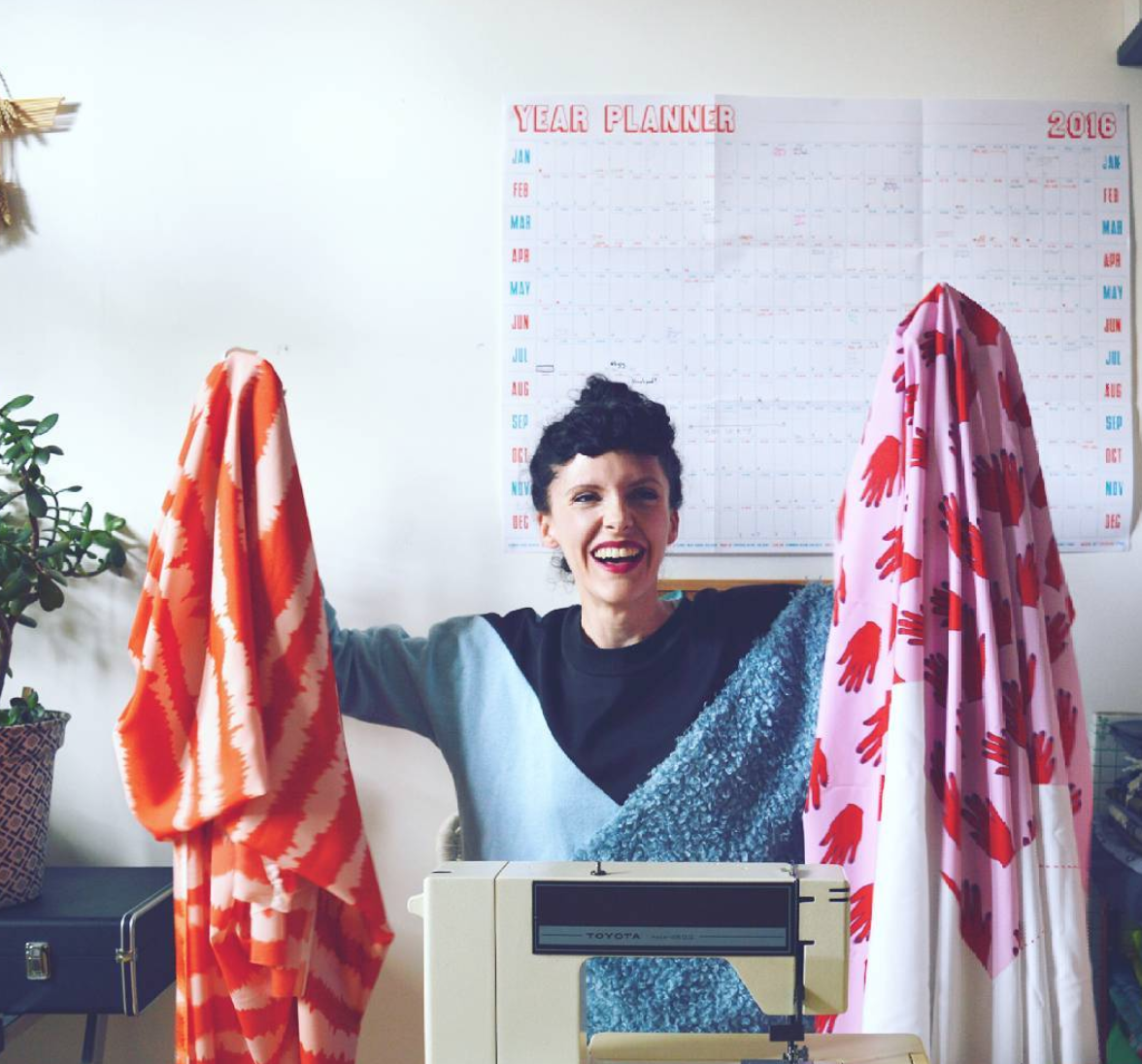 Well firstly, just to get this out of the way, I don’t think I have a career in the normal sense of the word as I think of careers as fairly linear. I have always had a split in my interests between wanting to create and wanting to do something useful for society. I started sewing clothes when I was a teenager back in 1998 and I’ve been on a sewing journey since then. While I was studying International Development at University I was also painting in my free time and making clothing which I sold at concession boutiques in London. I wore a lot of my own clothing and as everyone that sews knows, when word gets out that you can make stuff people start asking you to make stuff. I ended up doing some machine sewing for a living as well as designing and making costumes for some music videos and art films, which was really fun. I also spent 3 months travelling around Spain in camper van with my sewing machine, making things for people I met running my machine off solar powered electricity! After that, I decided to get a full time job at a charity, but after a couple of years there I had the idea for DIYcouture – to make simple, visual sewing tutorials that were accessible and desirable – and with a ridiculous amount of optimism I decided to quit my job and set up a business. I self-published some zine-like sewing instructions, built a website and tried to spread the word about my product! There are so many more ins and outs, which I won’t bore you with, but setting up DIYcouture led to many things, like writing my first book and teaching sewing workshops, and that lead to meeting Claire-Louise Hardy who runs the Thrifty Stitcher, and she employed me to assist her on the auditions of series one of The Great British Sewing Bee, which lead to me illustrating the patterns and on screen drawings for a number of seasons of the show. During all this, I started working part-time at a charity again, and I also wrote my book ‘No Patterns Needed!’ Right now I’m working on a really exciting two year project at the Royal National Institute of Blind People, and no doubt I will keep drifting between sewing and working in the third sector. 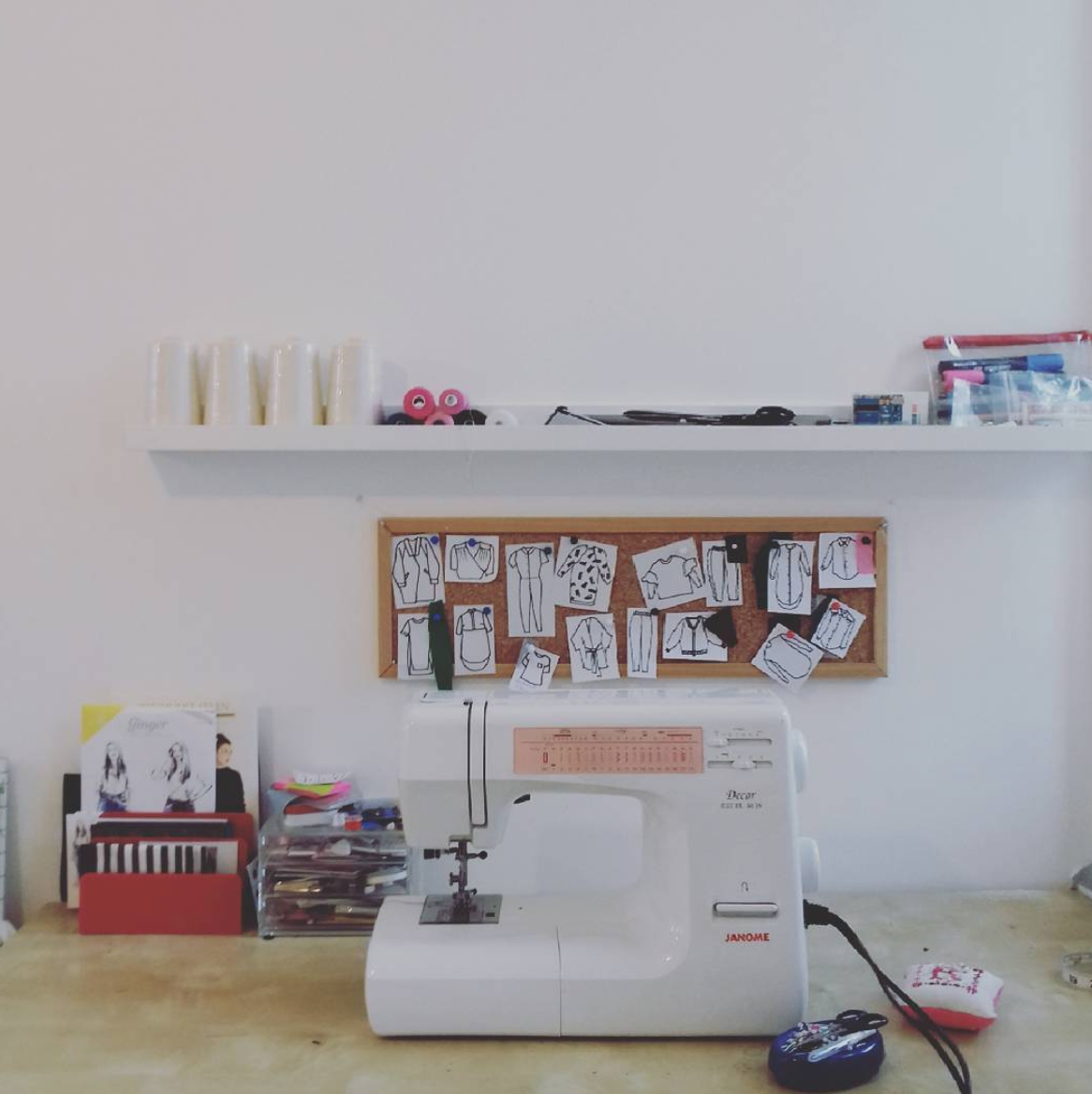 When I’m working on sewing projects I work in my flat in London. My boyfriend calls it ‘your room,’ which is really the case as all my fabric and equipment really dominates the space. But I call it ‘the fish’s room’ as we do have a tropical fish tank in it and I don’t want to admit that I have selfishly colonised a full room in a flat that only really has two rooms! I wrote ‘No Patterns Needed’ in this room. I took all the tutorial photos here with a big professional lighting set-up crammed into the corners and I also sit and do all the illustrations at my desk here. It’s in Hackney and right on a main road, and I really enjoy all that busy life being right outside my window. 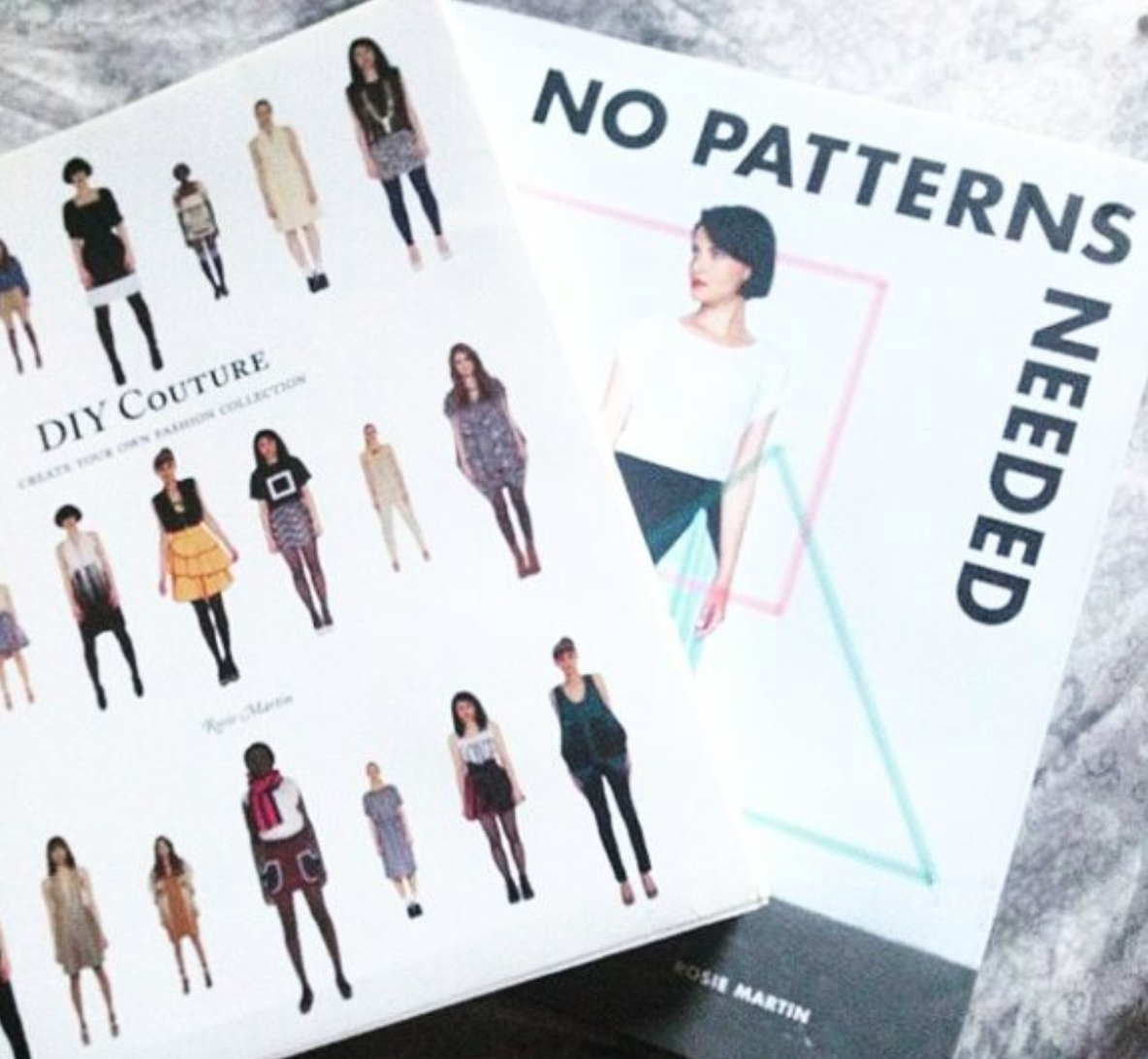 There definitely isn’t a typical day as I tend to plan my work in blocks with different content. I had a year to write ‘No Patterns Needed,’ which sounds like a lot but it really wasn’t. I plotted what I would be working on almost to the day on a big wall calendar. I spent about two months designing and toileing (which involved sewing a lot of garments that failed!) then I produced all the tutorials, which involved writing the text, rocketing off on fabric shopping missions on my bicycle, shooting the making photos which took between one and two days per garment, then drawing the illustrations which took about 3 days per garment. After that phase, there was a lot of computer work – editing written instructions and drawings and literally days of labelling files so I could send them to the book designer, Evelin, in a way that would make sense to her. Then there was a huge sewing phase as I made all the variations of the designs for my models to wear. That bit was really fun! I haven’t really described a typical day here I realise, sorry about that!

I have definitely never thought in terms of career in my life, which is probably a sign that I am a true millennial! When I was choosing what to study at university (which I was obviously very privileged to go to, before tuition fees were massively hiked in Britain) I made a decision to study something academic and pursue my creative interests in my spare time. I think my brain is split 50/50 between scientific and creative and I’ll never land more in one camp than the other, I’ll keep flipping between them, and I just take things project by project. Sewing is one thing I’m happy to say I have embraced for life and will continue to grow with me.

I guess as I originally didn’t really apply for a job there wasn’t anyone to ask me for qualifications! I’ve been lucky to be allowed to take on projects probably by demonstrating – bit by bit, over time – that I am capable. Self-publishing my own zines probably demonstrated to Laurence King that I was able to manage the work involved in writing a larger book. I believe in an active approach to learning, and that learning never ends. I normally enrol on a college course every other year, and I also learn a lot from books. I learned to build my own website from a book, and I also originally learned to illustrate digitally from a book. I don’t think education needs to be sanctioned by an institution to make it valuable. 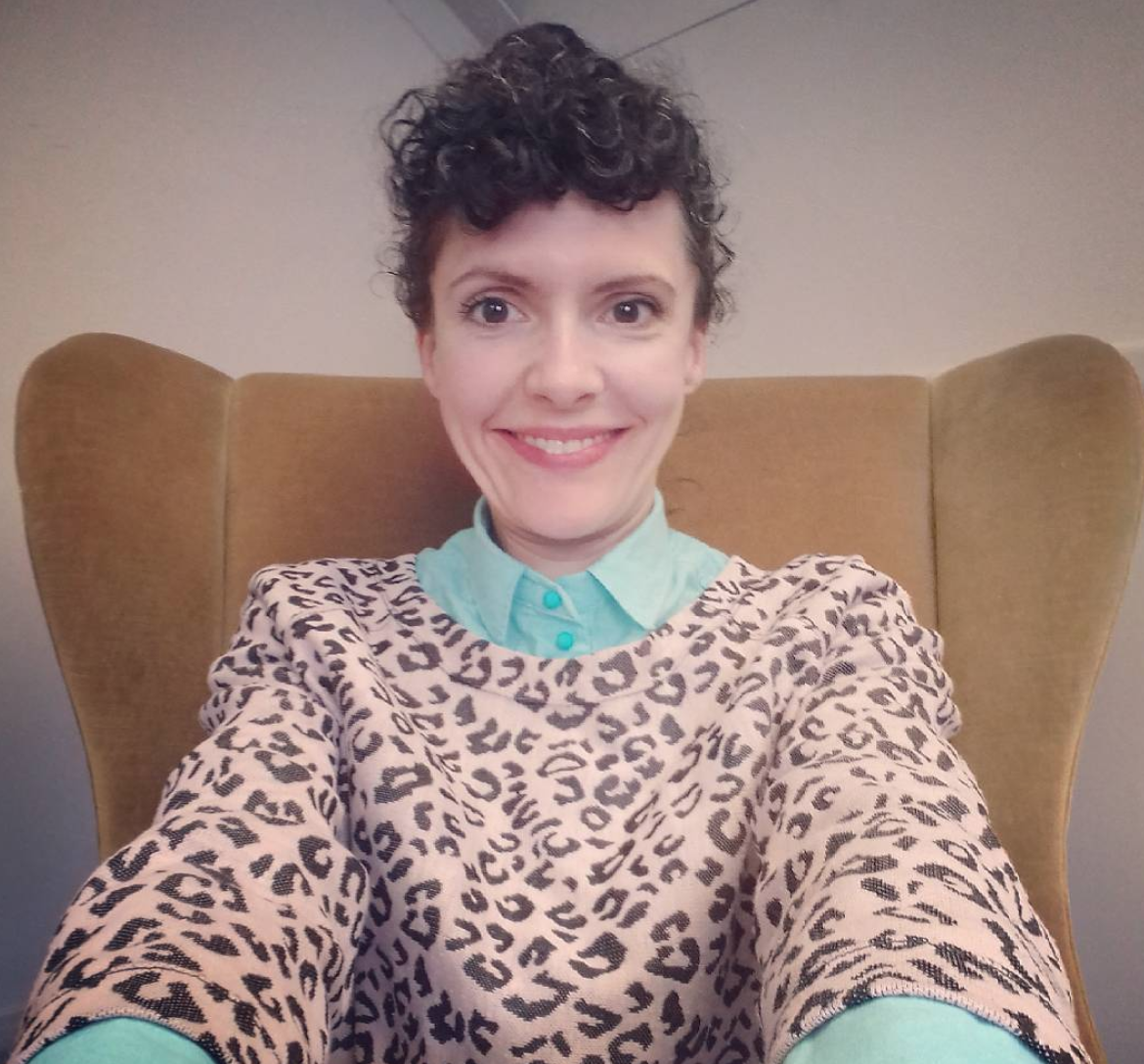 I would have to say just try things out, work hard if that’s what you want to do and be open both to meeting new people and to suggestions from other people

Sometimes I think I’d love to be an academic researcher. I enjoy learning, and exploring ideas and human stories, and I’d like to weave pictures from multiple strands of information. My friend Lu is doing a Phd in beauty and women in cities (in a nutshell) and I definitely crash her academic life whenever she generously lets me, attending talks and lectures and exhibitions with her! However, when I was a kid I wanted to be an inventor – a Chitty Chitty Bang Bang style inventor – and I think I would enjoy working in mechanical design or engineering, problem solving physical objects like big machines or structures as part of a team. Is there a job that combines those two things? Maybe I could do that!

My work at the moment is at RNIB, where I work on a project that has 2 years to help 300,000 blind and partially sighted people become confident using digital devices to explore the internet. Apart from that, I’m really enjoying my book having just come out and I’m just basking in that for a bit! I’m going to let some time pass and see what happens next. I have a few ideas and I also have the on-going urge to sew my own clothes, which I never have enough time for, so I may spend a few months just very selfishly sewing things for me to wear!

This is a difficult question. Having written a book called ‘No Patterns Needed’ I feel compelled to say you don’t actually need a pattern to start sewing, you can just follow a simple tutorial on YouTube (or in my book!) and make something you like. It’s your choice though obviously! Everyone likes to learn in different ways. Whether you pick a pattern or not, just start on whatever you want to start on! If something takes your fancy, give it a go. What’s the worst that can happen? Hopefully you’ll make something you love and you will most definitely learn something very useful that you can apply to your future adventures in sewing.

Make It Simple book review from Tillly and the Buttons